Great to have for the kids

I received the car before expected and it was very easy to put together. The car is beautiful and my daughter loves it. I love that fact that it has a parental remote but I don't like that she can still override the remote control.

My grandson loves it, the perfect size for the little guy.

We love the vehicle. It looks great, runs well. Now if I could only get my toddler to play with it🥲

My Grandson love it 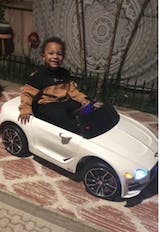 My granddaughter loves her SUV. It’s the perfect birthday gift for our little 3 year old. 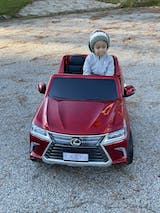 Shipping was quick. It was fairly easy to put together, all the lights were in working condition. Most importantly my 2yr old absolutely loves his car!

My son loves it !! It was a great 1st Birthday gift for him..thank you much! Everyone loves seeing it when we have had it outside rolling my son in it. #Very Satisfied 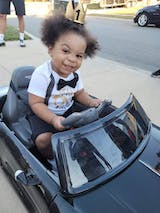 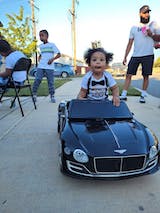 Had a couple lights out but otherwise a good product

Lots of fun for my two girls. Easy to assemble and worked out of the box.

My kid loves and I love it as well. Looks even better in person. I HIGHLY recommend!!

great ride for a kid but putting it together was not easy.

Excellent product the boys loved it and it was shipped very quickly!! Very satisfied customer and grandsons!!

My daughter loves her new Range Rover. It’s easy for her to get into and out of on her own. It was definitely a win with this purchase. 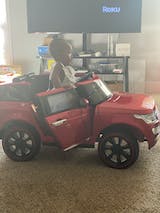 I’m writing this thorough review Bc I was nervous to buy this expensive bed with just one review (VERY NERVOUS)! So, I hope this helps you make a more informed decision! The bed arrived quickly (to Los Angeles) and is great quality. I read a review for a similar product on this website. It said it took 2 adults 2 hours to put together (NO THANKS!). We hired an assembly expert to come put it together the day after the bed arrived on Task Rabbit. He put the bed together by himself in an hour (additional cost was ~$100 - money well spent). My 3 year old, who has been begging for a car bed (I’m not sure how he knew such a thing existed,) was initially scared of the bed Bc it was bigger, louder, and had more lights than he was expecting. But after a few days, he moved in, and now he loves it! I actually am really enjoying it too.

Pros - arrived quickly (~2 weeks), looks great, my son loves it (after a few days hesitation), an assembly expert was able to put it together in an hour. My mom was concerned that the doors would fall on my son, but they’re on hydraulics with a magnet holding them down. They self open with a small tap.

Cons - 1. the mattress is a non-standard size and fills the whole opening, so it’s hard to get the sheets on. A slightly smaller mattress would work better. 2. Bc the mattress is slightly big for the space, the sheets (not pictured) keep getting stuck between the door and the magnet holding the doors down, causing the doors to pop open too easily/spontaneously when I am putting my son to sleep. 3. It looks like this company is in New York but after some research, it’s actually China I believe? The plug is not American. This requires a converter to plug in which was provided, but it means the bed has to push out an extra inch or so from the wall and probably isn’t the most efficient use of electricity. No issues so far though. 4. I wish the headlights had and a dimming option. My son loves them, but I think they’re way too bright for sleeping. 5. The bed arrived through a freight company and not UPS/FedEx. This was a surprise to me. One day I got a voicemail saying someone needed to deliver a package to my house. I thought it was spam. But they kept calling and eventually I realized it was the bed! 6. The bed arrived on a large pallet? Like freight. We live in a townhome and the pallet would not fit in our buildings’ dumpster, so we called the city of Los Angeles to come pick it up. They said we had to disassemble it first (ugh!). So my husband drove across the street to Home Depot and paid a day worker $25 to come haul it away for us. 7. Some parts of the bed feel a little fragile and might not be able to stand up to my 3 year old over time. No issues yet! My mom says that’s what EZ6000 is for, lol. 8. I read every comment on their Facebook and Instagram pages and their better business bureau page. It looks like some people have received beds/cars and had some pieces missing making it difficult or impossible to finish assembly. This did not happen to me! But if it had, customer service/returns/new parts would have been a pain to get internationally. Again, our assembly expert had no complaints, which was a huge relief. 9. The delivery guy would not bring the bed inside our house (Bc of COVID he said). Our son’s bedroom is on our second floor. But!! The assembly expert took everything up. Can’t recommend hiring someone to do this for you enough!

Overall I give this bed 5 stars and would buy it again! There are some minor issues/potential issues that might be a deal breaker for you, so I’ve included everything I can think of here! We’re converting his whole nursery into an NYC themed room (where he was born). If I can update the picture once this is done, I will! 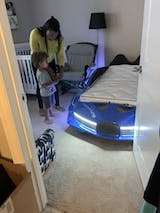 Son loves the monster truck and spot lights ….. but what took the cake was music my son loves to play while riding

Shipping at no cost

Products are covered by an extended warranty

Payments are SSL secured with encryption